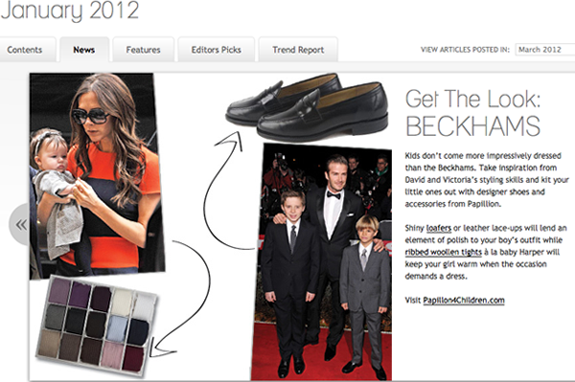 As posted on Sheerluxe in January 2012. 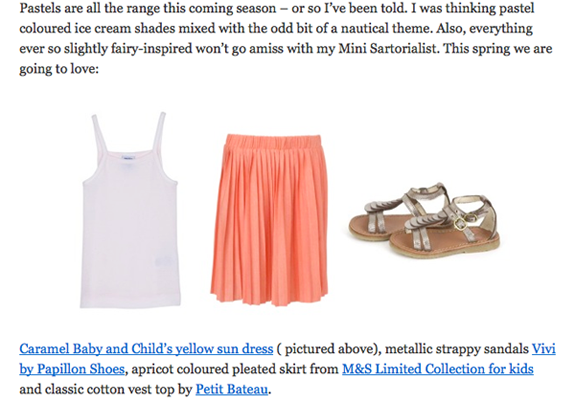 As published in Metropolitan Mum 1st March ’12 at http://www.metropolitanmum.co.uk/2012/03/ice-cream-and-pixie-dust/ 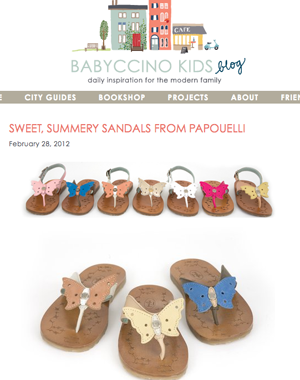 As published on the Babyccino Kids Blog: http://babyccinokids.com/blog/2012/02/28/sweet-summery-sandals-from-papouelli/

I think we’ve decided we’re officially allowed to talk about summery stuff now — after all, I’ve spotted the first snow drops and crocuses here in Amsterdam. These sweet butterfly sandals from Papouelli (formerly known as Papillon) are first on my list. Adorable! Made from perfect quality leather and decorated with a sweet leather butterfly they will look so sweet on (little) girls’ feet.

Papouelli has two physical shops in London but also an online boutique with a handy size guide which makes it easy to measure your child’s feet at home and order the right size. They have a great selection of classic, timeless shoes with a modern twist, that come in bigger sizes too. Because don’t your kids’ feet seem to get bigger and bigger every week?

A Match Made in Heaven 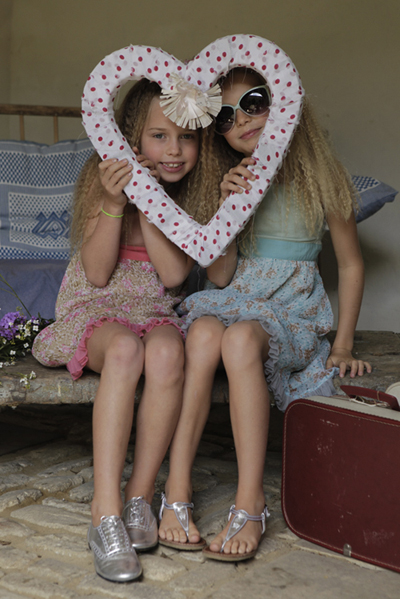 A girl can never have too many pairs of shoes, or indeed beautiful dresses, so the I Love Gorgeous pop up store at shoe shop Papillon sounds like music to any discerning fashionistas ears. Hosted by the Marylebone Lane London shop, the new spring I Love Gorgeous collection, bursting with typically pretty dresses, skirts and cardigans, will be on display to be admired alongside all the adorable selection of spring Papillon shoes.

Don’t miss out… The pop up shop at Papillon is open from Friday 10 February until Saturday 10 March. Open Monday-Saturday 10am until 6pm and on Sunday 12pm until 5pm.

Did you know… Papillon won the best footwear category in the Junior Design Awards 2011 and I Love Gorgeous were highly commended in the best designer girls fashion category.

On a slightly different note, Papillon will be known as Papouelli as of March 1 2012. Still the same lovely shoes, just by a different name. 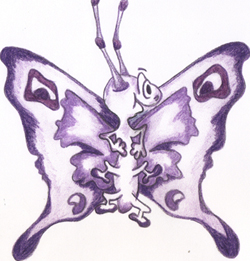 A UNIQUE NEW NAME FOR A UNIQUE BRAND

Once upon a time there was a Kingdom called PAPILLON – this beautiful land of high mountains, green valleys and waterfalls was the land of the Butterflies.

This is a story about a particular little butterfly called Papouelli.

Papouelli came from a large family – he had 9 brothers and 4 sisters and he was the youngest.

They lived happily, if a little squashed in The Middle Hollow, The Large Oak Tree, Blackberry Common.

Papouelli was teased all the time by his older brothers and sisters as he had very small wings (sort of purple) and he had very, very small feet – you might think that butterflies do not have feet – but they do, 6 to be precise. These little feet stick out underneath them. It made life so much easier when they landed on flowers or leaves.

One week in early summer The Shoemaker made his annual visit to the town. Butterflies as you may know do not wear clothes and so shoes were the most highly prized and important things.

golden and silken shoes made of the finest leathers with suede ‘landing soles’. Suede is better than leather on the bottom of butterfly shoes and it is less slippery when they land on petals and leaves.

Papouelli was fascinated each year by the Shoemaker. He was always handed down his brothers’ and embarrassingly sometimes his sisters’ shoes. He hated it. They never fitted very well, were uncomfortable – and never ever beautiful. All he wished for was his own pair of shoes.

Papouelli went everyday to The Square to watch the master shoe maker at work. After a few days he asked if he could help and as the weeks went by he swept up the leather scraps and sole cuttings, picked up threads and laces. Soon he was allowed to help cut the patterns and began stitching feathers and buckles to the most expensive and beautiful shoes.

The Shoemaker was so impressed by this young butterfly he decided to make Papouelli his own special pair of shoes as a surprise present – he worked in secret after Papouelli had gone home and made a pair in deep purple suede with red feathers, a golden heel and a turquoise suede ‘landing sole’.

He presented them to Papouelli on his last day in a large pale green box with his name written in brown on the front.

As you can imagine Papouelli was overjoyed – his OWN pair of shoes and what a magnificent pair at that – Papouelli decided from that day forward that he would have a shop that made beautiful wonderful shoes for children and it would be called PAPOUELLI after him. 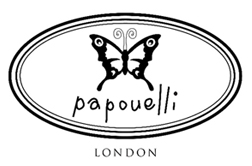 WE WOULD LIKE TO ANNOUNCE A SMALL NAME CHANGE AS FROM 1ST MARCH 2012 WHEN PAPILLON WILL EMERGE AS PAPOUELLI. ABSOLUTELY NOTHING ELSE ABOUT US WILL CHANGE, SAME SHOES, SAME LOGO, SAME OWNERS.
THE REASON BEHIND THIS NAME CHANGE IS OUR INTERNATIONAL EXPANSION, AND A MORE UNIQUE NAME WAS NEEDED. WE FEEL WE STAND OUT FROM THE CROWD EVEN BETTER AS PAPOUELLI, (PRONOUNCED: PAP-OO-ELLI), WHICH BY THE WAY MEANS NOTHING AT ALL!

We have always loved ILoveGorgeous and are thrilled to have them open a pop-up in our Marylebone Lane flagship store. They will be with us from Thursday 9th February until Sunday 11th March. Do come and admire their utterly gorgeous new Spring collection. See the above photo where the models are wearing ILG clothes with our shoes..

For more information on ILoveGorgeous please see their website:

We have always loved ILoveGorgeous and are thrilled to have them open a pop-up in our Marylebone Lane flagship store. They will be with us from Thursday 9th February until Sunday 11th March. Do come and admire their utterly gorgeous new Spring collection. See the above photo where the models are wearing ILG clothes and our shoes..

For more information on ILoveGorgeous please see their website: 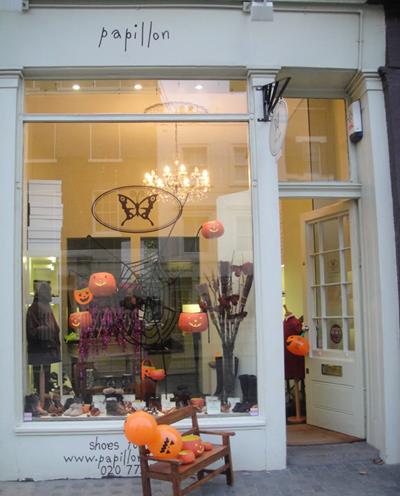 On 31st October we held our first Spooky Walk at Papillon Elizabeth Street for trick or treaters. It was such a success that we will be holding this event annually to celebrate Halloween! 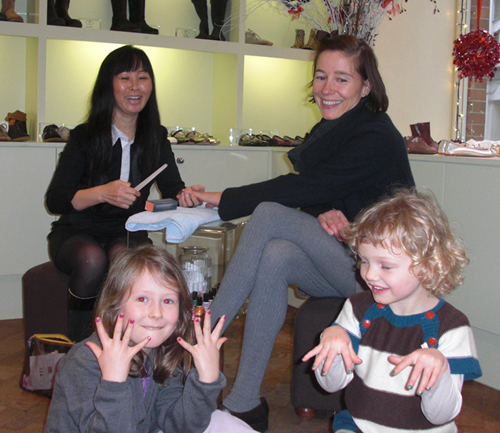 At our Marylebone store

We are so excited to announce the opening of our Saturday Nailbar at our Marylebone store. Come and treat your child or yourself to an express nail session with one of London’s best manicurist for £5. We have 15 fabulous colours to chose from, all non-toxic Hopscotch products, and we can even add artwork to the nails. For mothers we work with Essie colours. The nailbar is available every Saturday from 11am until 4pm at 98, Marylebone Lane, W1. 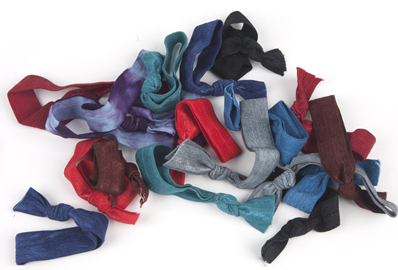 We love our new hair accessories! Have a look at these bows and Alice bands, or check out the very cool elasticated bands. At the moment these are only sold in our stores. 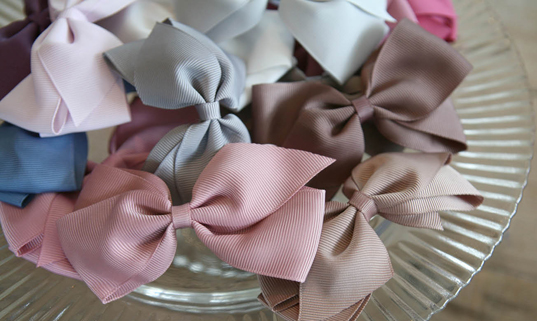 We are thrilled to have been awarded the Junior Footwear Design Prize 2011. american cash advance

We’ll notify you once they are back in stock

Please leave us your email and the style, size and colour you are after.